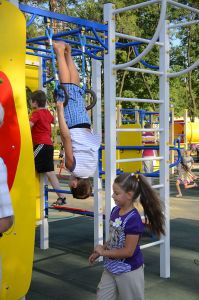 Asking someone, “What’s your problem?” can seem like a confrontational challenge.  It’s like saying, “So, tell me:  What’s irking you?  What is it that’s nagging you or getting under your skin, unsettling you?”

Yet problems are rarely so tightly and completely spelled out that there is no room for creativity in how we define the problem.  Because solutions and problems mutually inform one another, when posed in the right spirit, asking “What’s your problem” could be a well-timed, well-meaning, and well-informed impetus to exploring opportunities for new and creative solutions.  “What’s your problem?” can be a welcome invitation to creative thinking and creative problem finding.

In the many worlds in which we are called on to make things – design, engineering, art, education, everyday living – there is often an important difference between how a problem is presented to us, and what the problem really is (or could be).  Problems as presented are not problems fully and clearly defined.

But how do we get from the oftentimes muddy, vague, or indeterminate way a problem is presented – a presentation that may even subtly miss or misconstrue the vital nub of the issue – to a more clearly and precisely defined problem that more fully squares with the real issues at hand?

Although much research in design and engineering has focused on strategies for solving problems, fewer studies have focused on the earlier stages of problem exploration or problem discovery.  Still, there are some notable hints, including some new cues based on a recent study that took a fresh tack to addressing this question.

Let’s take a closer look at the findings from that recent study, led by a team of four researchers in industrial design, mechanical engineering, and psychology at Iowa State University and the University of Michigan.

The researchers started by pulling together two independent sources of publicly available data.  On the one side, they drew upon an existing database of presented problems relating to product design.  On the other side, delving into the records of a number of crowd-sourced design competitions and documents on award-winning designs, they compiled a set of discovered problems and solutions.  Then they systematically compared what was first given, in the presented problem, with how the problem was further unearthed (“dis-covered”) by different design teams.

Take their example of a challenge to design a “next generation” outdoor playground.  The “presented problem” might state a number of requirements, say, that the playground system must be modular, allowing the user to adjust the playground equipment to different sites and to modify the configuration to permit a wider and more varied set of experiences.  Other presented requirements might be that the playground equipment must be independently accessible by children in wheelchairs, and must be visually appealing in both urban and natural settings.

Given this design brief, one team identified and imposed some of their own particular constraints.  They decided that the playground should be especially intended for children between the ages of 6 to 12 years, and should take inspiration from the ways in which children of those ages are interested in relating to, and competing with, their friends during play.  Rather than modular structures, they thought of their system as involving “constellations” that could be readily re-configured into new challenging and inviting groupings and shapes.

Across a wide array of design challenges and specific proposed responses to those challenges, the researchers extracted 32 different “problem exploration patterns” or sorts of self-generated constraints.  Each type of constraint was a method that designers and innovative teams used to move from a comparatively vague or underspecified design problem to something more specific and definite that the designing team could better creatively imaginatively and concretely grapple with.  Sometimes it involved broadening the setting of the problem, at other times narrowing it.  Sometimes it involved redefining the desired outcome, at other times adding secondary functions, or describing conditions in the natural environment.

The researchers then compared how many voluntarily added constraints a given design included.  They also looked at whether each design – incorporating from only one to six different problem explorations patterns – was selected as a finalist, was chosen as a semifinalist, or was not selected at all.

So, did adding constraints boost creativity?

Let’s look at the picture of their findings below. 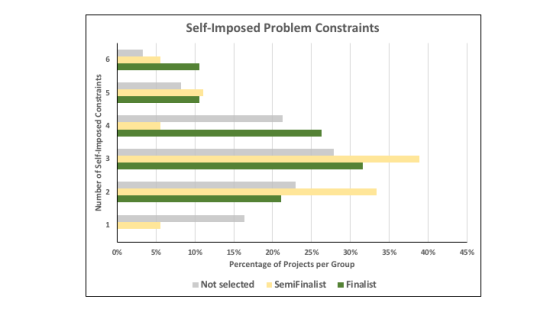 Self-imposed constraints and innovation prize-winning. Source: Adapted from Figure 9 of Studer et al. (2018) by W Koutstaal, with raw counts changed to percentages within each group.

The simple take-away:  Design teams that found several different ways to deliberately spell out their own constraints for the problem they had been given were more likely to develop prize-winning solutions.  The constraints they chose to impose on the initially provided problem could be related to any of several aspects – the setting, the goals, limitations, and/or stakeholders.  But rather than rigidly confining the designers into a narrow idea space, by adding their own constraints to the problem, and changing the shape of the problem they were solving, the designers were freed to generate innovative solutions that might otherwise have been beyond their reach.

Imagine that you have just been invited to take part in an online experiment in which you will be asked to generate as many creative ideas as possible.

Imagine, too, that you are given the opportunity to first read the instructions for the creative challenge you will be set, and that you can choose between one of two sets of instructions, A or B.

You are also told that exactly 25% of the responses will be reviewed (Version A) or, instead, that some –– no percentage specified –– will be reviewed (Version B).  Additionally, you are told “You will receive your compensation within 48 hours of completing this task, in your PayPal account” (Version A) or “You will receive your compensation within 2 days” (Version B).

On testing it out see: “Finding and Making Sweet Spots in your Creative Process.”

Two poses of the robot Nao.

Soon social and assistive robots will become ever more a part of our lives. They could be in our homes, our hospitals, and our schools, helping us with childcare, elderly care, in rehabilitation from injury or disease, and as social and assistive aids in all sorts of capacities.

But how much do we know about the psychology of our interactions with robots? What should any one social or assistive robot look like? How should it move and react to us –– and to what sorts of information? Should it appear to show “emotions” and be responsive to our own emotions? How much like a person should an assistive robot be? How innovative can we be in designing robots to be responsive assistants and sure supports including in times of stress or in tension-fraught situations?

Let’s take a look at two different recent research studies that explore how we understand and respond to expressions of emotion in robots. . . .

—> See: How do we Read Emotions in Robots: Of social robots, innovation spaces, and creatively finding things out.